Computer Works Pro, Inc. is a computer consulting firm specializing in Professional IT solutions, services, sales and support, as well as Personal Computer Training. The business was started in 2001 as a part-time for extra income. It grew into a full time business in 2002 and just recently expanded into a corporation in 2011 with the addition of a storefront.

Computer Works Pro is also a proud member of the Webster Chamber of Commerce and offers a discount to chamber members.

We also received the prestigous award for Webster Chamber of Commerce Business of the Month for the month of November 2021. 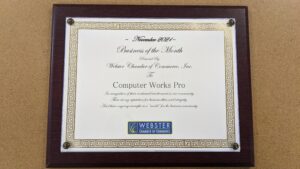 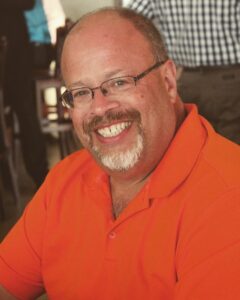 Ken has a very strong background in electronics and computers starting at a very young age, when he began using IBM punch cards in 7th grade.  Ken attended Mohawk Valley Community College in Utica, NY. There he obtained an Associates degree in Electrical Technology. Upon graduation in 1981, Ken was hired by Xerox Corporation in Rochester, NY, as an electronic technician. Ken attended night school part-time at Rochester Institute of Technology. In 1987 he obtained a Bachelor of Science degree in Electrical Engineering Technology from the College of Applied Science and Technology. Shortly thereafter, Ken was promoted to an engineer to develop the service documentation for the Electronic Subsystem of the new DocuTech high-speed digital printer. In 1990, Ken became interested in personal computers, as a result of working on a Xerox digital scanner product known as DigiPath. The DigitPath system was based on a PC and utilized the Windows platform. In order to troubleshoot the product effectively, Ken had to learn every Windows operating sytem. Later, as part of supporting the sales organization, Ken taught himself the Windows NT Server platform to run A Goldmine customer database. In 2002, Ken was laid off from Xerox and started his own company, Computer Works Pro, to provide on-site support to local businesses. In June of 2011, Ken opened up a new storefront in the Webster/Penfield area, which added a retail presence to the business. Ken is a Microsoft Certified Professional and holds a CompTIA A+ certification. He also teaches CompTIA A+ classes as well as many Microsoft Office classes in the Rochester area.